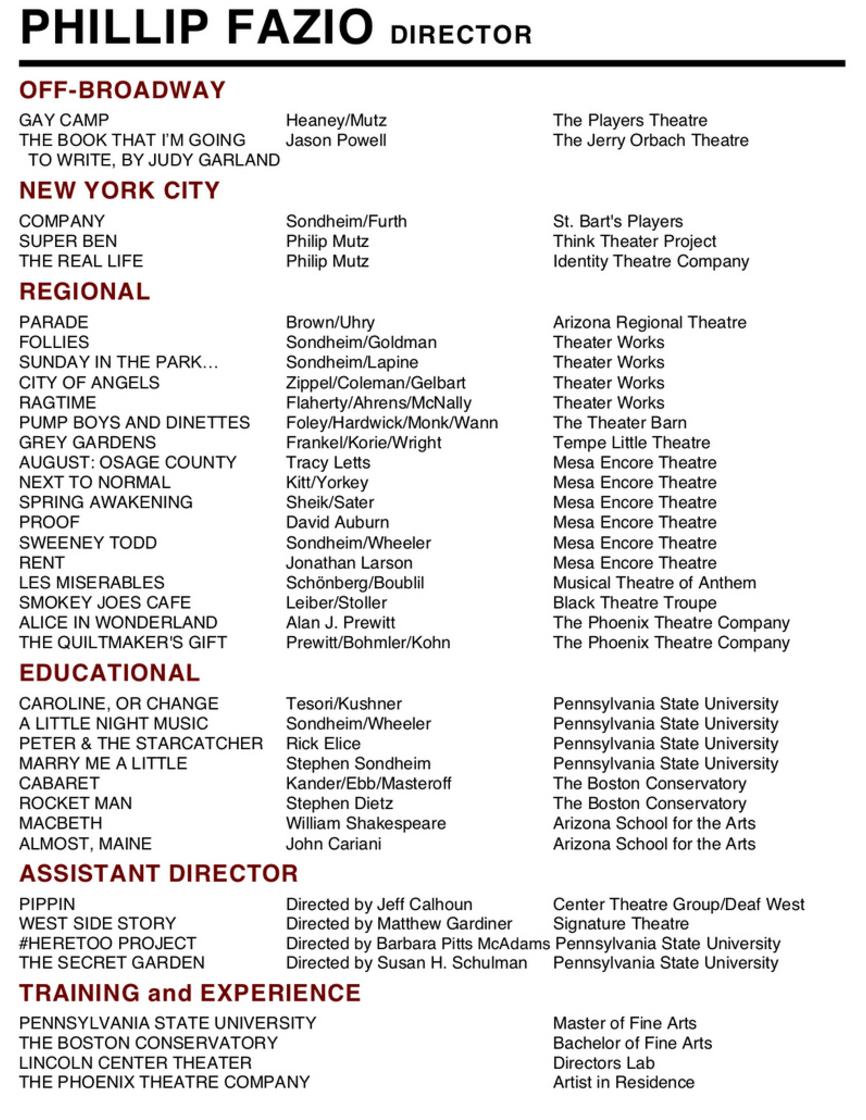 Gay Camp, the screamingly funny FringeNYC show that is completely and utterly over the top — as it should be. Under the swift direction of Phillip Fazio…the show delights in sending up the absurdity of the ex-gay movement, ​also taking on such hot-button topics as companies with anti-gay agendas and closeted Hollywood celebrities. It’s hysterical. And with a title like ​Gay Camp, it should be. –Charles C Bales nytheatre.com

Sunday in the Park with George - Theater Works

In a new production from Theater Works in Peoria, director Phillip Fazio renders Sondheim’s work with

painstaking craftsmanship animated by a genuine passion for the material. It is a triumph of both the mind and

the heart, with affecting performances and vibrant video projections that are integral, and absolutely essential,

to the storytelling. -Kerry Lengel The Arizona Republic​​

Sunday in the Park with George is receiving a sumptuous production at Theater Works with an exceptional cast and clear direction that get across the important themes and messages of the play. Director Phillip Fazio displays an abundance of dedication and passion ​in his abilities to effectively stage this challenging work. -Gil Benbrook Talkin Broadway

Fazio's direction is excellent. His pacing for the play is even, never rushing with the explosive scenes but naturally evolving from quiet to outright rage. He does a nice job in offsetting the more emotional outburst sections with several tender moments. - Gil Benbrook, Talkin Broadway

Letts' mastery of dialogue, along with the uniformly excellent timing and dynamic variation of the cast, directed by Phillip Fazio, keep things humming along. - Julie Peterson, Phoenix New Times

Director Phillip Fazio simplifies the original staging but still delivers a grandly scaled masterpiece…
Any serious theatergoer owes themselves a trip to the Peoria Center for the Performing Arts to see
Theater Works stellar Ragtime. - Chris Curcio Curtain Up Phoenix

Theater Works’ production is directed by New York-based Phillip Fazio.  He shows a sure hand in bringing a huge cast into harmony, engineering exciting set pieces with period-inflected tunes.  This is great American drama served up with confident flair. - Kerry Lengel The Arizona Republic

Director Phillip Fazio does an exceptional job. Fazio knows the right way to direct the many showstopping numbers so they have emotional resonance. -Gil Benbrook Talkin Broadway

New York based director Phillip Fazio, who regularly leads such Valley productions as Theater Works' "Ragtime" and Mesa Encore Theatre's "August: Osage County," has proven he knows how to deliver an emotional wallop onstage, and "Follies" is no exception. -Kerry Lengel The Arizona Republic

Fazio's direction derives emotionally rich portrayals from the cast that are full of passion and pain.

He uses the aisles in the theatre to open up the show which, at times, make us feel part of the jury or the